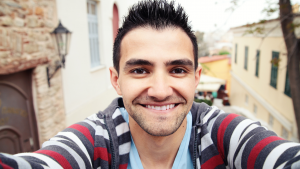 When I started my semester in Winchester, England, I struggled.

Before I left, I only knew the names of two of the 25 people going to Winchester from University of Wisconsin–Eau Claire. The "friends" that I made from Eau Claire became extremely involved in the drinking and club scene. Istruggled to form relationships and keep my spirits high in a foreign place where I didn't yet know anyone who loved Jesus. I felt alone.

Although I went abroad looking for a Christian group, I didn’t find the Christian Union (CU) for awhile. The CU is a student-led group on campus similar to InterVarsity, and it was absolutely amazing! They met once a week as a large group (about 50 students). The group often had preachers and speakers from local churches to give a talk, as well as having time for worship and prayer. The large group meetings were a great time for non-Christians to come and learn about God in a non-threatening environment.

Something really special about the CU is an outreach event they called “Dial-A-Doughnut.” The CU had a budget to spend on doughnuts for the event. They put numerous posters up around campus with the CU phone number on them inviting students to call/text with their address and any questions they have about God. In exchange, the CU would drop off a doughnut and answer the question as best they could.

As questions were texted in, the CU members gathered in groups to discuss answers. When an answer was decided upon, two or more members would go to the dorm/house/apartment of the student who texted, doughnut in hand. They often had great conversations and started relationships with the students they met.

Dial-a-Doughnut was one of the main ways that I saw the Winchester campus transformed and it was truly awe inspiring. They held this event every other week at the beginning of the year and increased it to every week due to the number of texts/calls that came in. Each time, I would guess a hundred or more questions about God got answered. This is one of my favorite parts about the CU and proved to have a huge impact on me and a large impact on their campus.

Another thing that I found to be extremely difficult is that the CU did not have any form of a Bible study. While they had weekly speakers, there was never a time where students were invited to meet and study scripture with one another. Bible studies are one of the main ways that I connect with God and I've found them to be extremely influential in my faith; so when I discovered that Winchester did not have one for students on campus, I was really discouraged—probably more than I should have been. Through the CU, however, I met a woman named KerryLyn. She was also studying abroad from the U.S. and had a heart that was on fire for the Lord. After having a conversation with her, we decided that we wanted to have a Bible study, even if it was just the two of us.

KerryLyn and I began to study scripture together. We adopted InterVarsity’s Bible study format, and actually ended up going through the same book that InterVarsity was studying at Eau Claire. As KerryLyn and I continued to study scripture together, we invited other students to meet with us, and it developed into a larger Bible study with her and me as the leaders. During my weekly meetings with Justin (my InterVarsity staff at Eau Claire), he would help me prep for Bible study the way I would prep in a group at Eau Claire. We continued to hold this weekly study, and the president of the CU asked us if we would speak at their large group and invite the entire CU to study scripture with us. Within a few weeks, we had a group of about 15-20 students who gathered together to dive into the Word of God.

Near the end of our time, a few students who were on the committee of the CU asked if I could meet with them to talk. They said as a CU committee they decided they want to keep this study going and asked me to explain to them how it started, how we picked the passage, what it looks like, what I have found to work and not to work, and for advice for keeping it going for the future. They said the CU was originally against the idea because they wanted people to get more involved in churches in the community. But then they discussed it more as some of the CU committee members started coming to the study KerryLyn and I were holding and decided that it would be good to have on-campus options as well. They wanted to start focusing more on being together on and off campus and being able to show other people God's love in whatever way they can. We also got to talk about what it looked like to be part of a community and how that is built and sustained on campus. I was able to tell them about dorm-based Bible studies and how that has impacted my life at Eau Claire.

Since I left England, I have spoken with some of the members of the CU. They have adopted the practice of having dorm-based Bible studies. At one point, they had 10 Bible study leaders, all leading in pairs in five of the dorms on the Winchester campus. They are currently in a place of trying to figure out what works and what doesn’t work for their campus.

Through my time abroad, I was affirmed in the fact that God will use me to help spread his word and his love wherever I am. I also was taught how to love people in a setting outside of Bible study. I gained much confidence and experience in conversing with strangers about God. I was able to figure out how to start a Bible study in a setting that does not have one for me to join.

All of these things have helped me to grow as a person, to grow in my faith, and have exponentially increased my desire and ability to trust God in all situations.