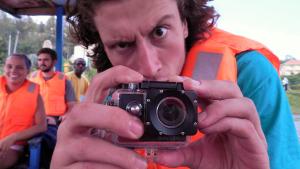 Dan spent a semester in Rwanda where, as part of his coursework, he visited a refugee camp filled with Congolese people permanently displaced from their homes. During the visit, Dan found out about a pilot project that had the potential to improve the refugees’ lives: designing a solar oven that would help them cook without burning wood. As an engineering student, Dan was intrigued.

Off the bat, the project would have three main impacts:

1. Improve refugees’ health: Families would no longer inhale smoke in their huts.
2. Prevent environmental degradation: Deforestation is a growing problem in Rwanda.
3. Provide income: Families could boil butchers’ discarded pig parts to create lye to sell to a nearby soap manufacturer.

Dan could never have guessed the unexpected fourth impact, but before he’d find out, he’d have to overcome the project’s main drawback: Congolese refugees could not actually afford a solar oven.

Through his classes in Rwanda, Dan had learned that Western charity does not result in sustainability for those who receive it. Simply raising money for a few ovens would not have a long-term impact, plus it could unintentionally create dependence on Western funds.

Undeterred, Dan returned from his semester abroad; the seed of the refugees’ plight had taken root in his imagination. He told his engineering professor about the idea, and Dan’s class got down to work on improving the solar-oven design.

Within a few months, the students produced a solar oven at 50% of the cost. A few weeks later, they further improved the design to achieve another 50% cost reduction. Now, for the equivalent of $30 USD, a refugee family can find resources locally to produce and distribute many solar ovens.

The director of the refugee camp shared a stunning fact in light of the cost-reducing innovation: the redesigned oven will reduce rape in the refugee community.

With traditional wood-burning ovens, boys and girls are sent daily to gather wood in the forest, leaving them vulnerable to frequent assault. The solar oven will keep these children closer to home and out of harm’s way.

Students like Dan can participate in God’s healing work worldwide. When students choose to study abroad on a program like InterVarsity’s in Rwanda or Thailand, they learn from more than lectures. Students form relationships with locals abroad which inspire them to use their heads, hearts, and hands to contribute to these communities which are simultaneously nurturing transformation in our students. Transformation that doesn’t just stay in their semester-long home abroad, but returns to the U.S. with them and can continue growing and have an exponential impact.