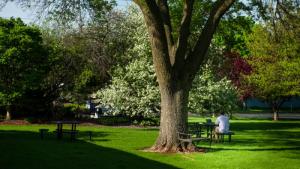 The following article was written by Drew Larson and posted on the InterVarsity.org on July 9, 2019.

Picture yourself alone in a foreign country—a place where you have no connections. You’re a college student studying abroad and interning thousands of miles from your campus and your friends, and a Christian in a country where following Jesus makes you a curiosity at best and a threat at worst.

And, with all that going on, you’re also asking yourself: What can I do while I’m here to advance God’s kingdom?

Hold that picture in your mind for a moment. Because that’s exactly what James* did.

As an energy science major in New England, James had been preparing to work and study abroad in South Asia for most of his academic career. He’d taken pains to become fluent in the native language of the place where he planned to intern and had created a small group Bible study on campus just for other South Asian students in his major. James was also, according to his InterVarsity Campus Staff Minister, Karen, low-key amazing at leading people to Christ.

“He was just one of those students who consistently had two, three, four students coming to faith in his small group every year,” she said. “He’s one of those unassuming, quietly confident guys, but not one of those people someone would look at and say, ‘Oh, you’re a gifted evangelist.’ So I knew he was going to be a missional student before he went to study abroad because he’d been that kind of student already.”

James first spent a semester abroad studying at a South Asian university, supported by a Digital Small Group through InterVarsity’s Study Abroad program, and dreamed of all that he hoped to accomplish for Christ while overseas. But while he shared his faith with a number of fellow students, he found his efforts at outreach mostly stalling out.

“He had this moment in the small group where he realized that he had entered the semester with a dream of a ton of people coming to faith around him, and he hadn’t [seen that happen] yet,” Karen said. “That dream was all about him. But God was preparing him for the slower, more faithful work of missions, for trusting God for what God will do—kind of a holy patience. That can be hard for a rock-star evangelist to hear.”

James did settle in and wait though, and several months later, while interning at a large South Asian energy company during his second semester abroad, he finally got his chance. The company asked him to lead an English language lunch on Fridays all about American culture. With Good Friday approaching, James sensed an opportunity, despite the fact that the Human Resources Department heavily monitored public speech. He put together a presentation that used the Easter holiday as a springboard to subtly share the gospel.

“He and I met to find all the subtle ways that we could talk about the true meaning of Easter in the context of an American holiday, and then we prayed. By God’s grace HR [at his company] approved the plan,” Karen said. “So he essentially got to share the gospel with his coworkers.”

Afterward, one of James’s coworkers asked him additional questions about his faith, and James was able to share more about the hope of Jesus.

After his year abroad, James returned to campus, graduated, and now works full time at a US branch of the company he interned with. Even more importantly, he returned to the US with even more confidence and strength. “There’s a new sureness around him and his faith that I don’t often see in 22-year-olds,” Karen said. “He’s also gained some new evangelistic creativity, realizing that mission and evangelism look really different from context to context, and even from campus to the workplace.

“Study Abroad students [like James] have this opportunity to plant seeds that others often don’t,” continued Karen. “James had this really great placement to work with some very influential local people. All he had to do was be patient, plant seeds of the gospel, and then pray for God to bring along someone else to water them and make them grow.”

*Names and some details changed to protect student’s identity